UGE: Solar Projects Are Shining Due to Strong Economics 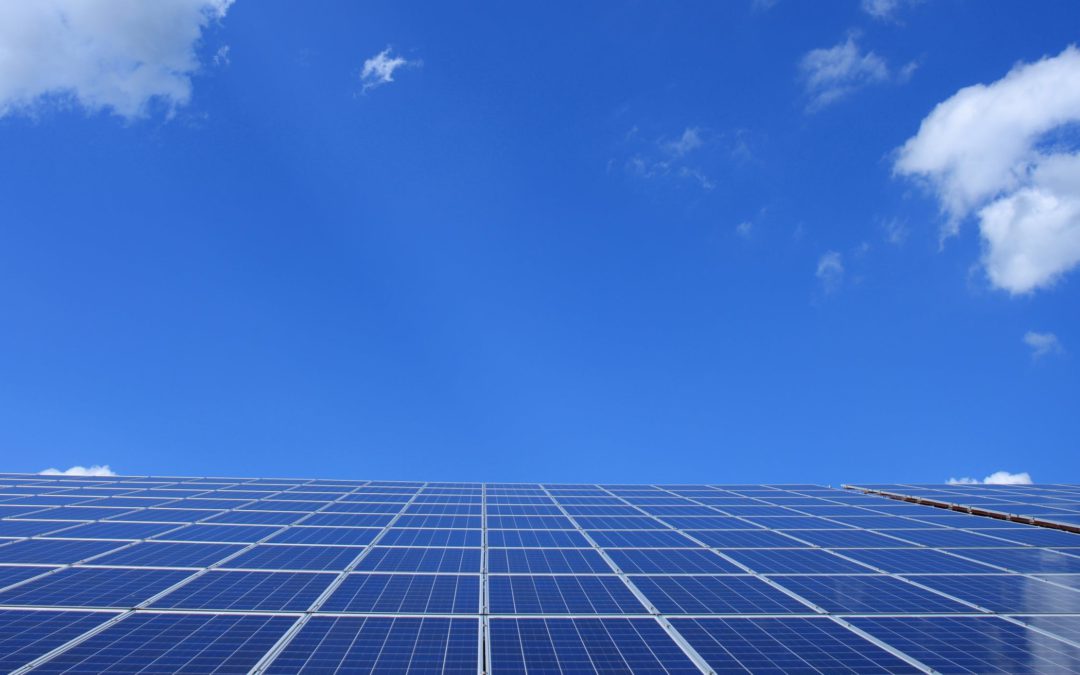 In Sophic Capital’s Shining A Light On The U.S. Solar Industry report, we highlighted: 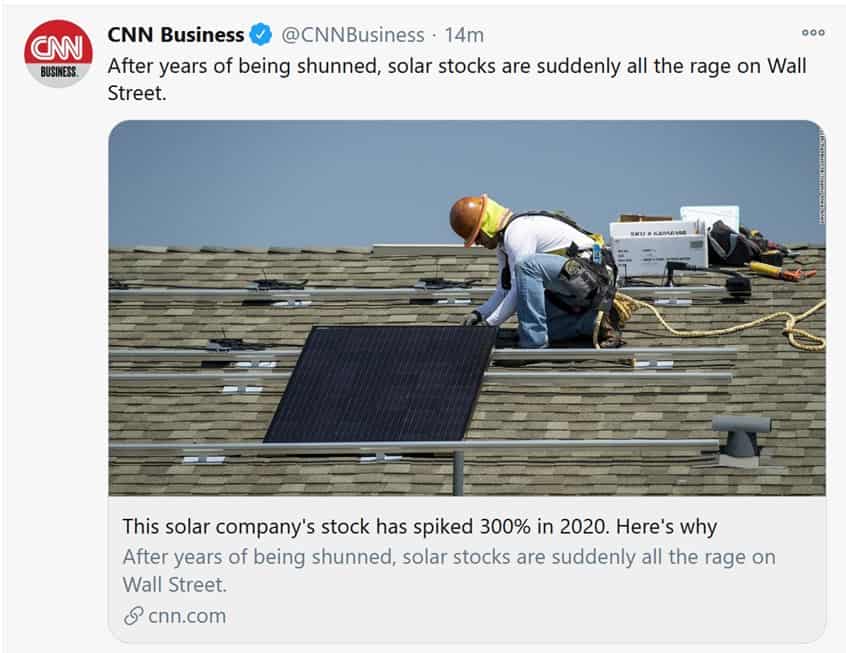 In this report, we provide data points about why investors should invest in solar energy companies. Exhibit 1 outlines, the Invesco Solar ETF [NYSEARCA:TAN]. The ETF seeks to track investment results of the MAC Global Solar Energy Index, which is designed to provide exposure to companies listed on exchanges in developed markets that derive a significant amount of their revenues from solar power equipment producers including ancillary or enabling products. This ETF has handily outperformed the NASDAQ-100 index year-to-date, suggesting investors expect continued out performance in the sector. Importantly, this outperformance has been delivered despite a less friendly US federal administration. 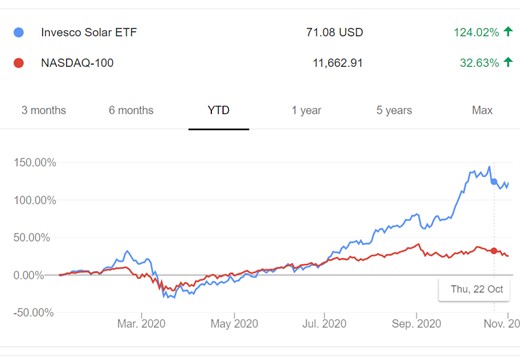 Perhaps the most powerful statement that shook up the solar energy industry came from the International Energy Agency (“IEA”), a global energy advocacy founded to address the 1970s oil crisis. In its World Energy Outlook 2020 report, the IEA stated: “…solar PV is consistently cheaper than new coal- or gas-fired power plants in most countries, and solar projects now offer some of the lowest cost electricity ever seen.” In most nations, solar photovoltaics (“PV”) are now cheaper than coal and natural gas plants.

We’d like to highlight two important points: The first is that globally, solar PV is the dominant renewable energy source and will likely continue to lead through 2024 (Exhibit 2). Second, according to IEA, China is about to embark on the most aggressive solar PV expansion through 2030 (Exhibit 3). China will account for almost half of global distributed solar photovoltaic growth, potentially surpassing European Union installed capacity next year.

IEA also forcasts the U.S. to significantly increase solar PV energy production by 2030. For this report, we will focus on the U.S. since it is UGE International’s primary targeted market.

I see solar becoming the new king of the world’s electricity markets. Based on today’s policy settings, it is on track to set new records for deployment every year after 2022.

Exhibit 2: Solar PV Leads Other Renewables for Current and Forecasted Capacity Through 2024

Exhibit 3: China is Poised to Have the Most Aggressive Solar PV Capacity Expansion Through 2030 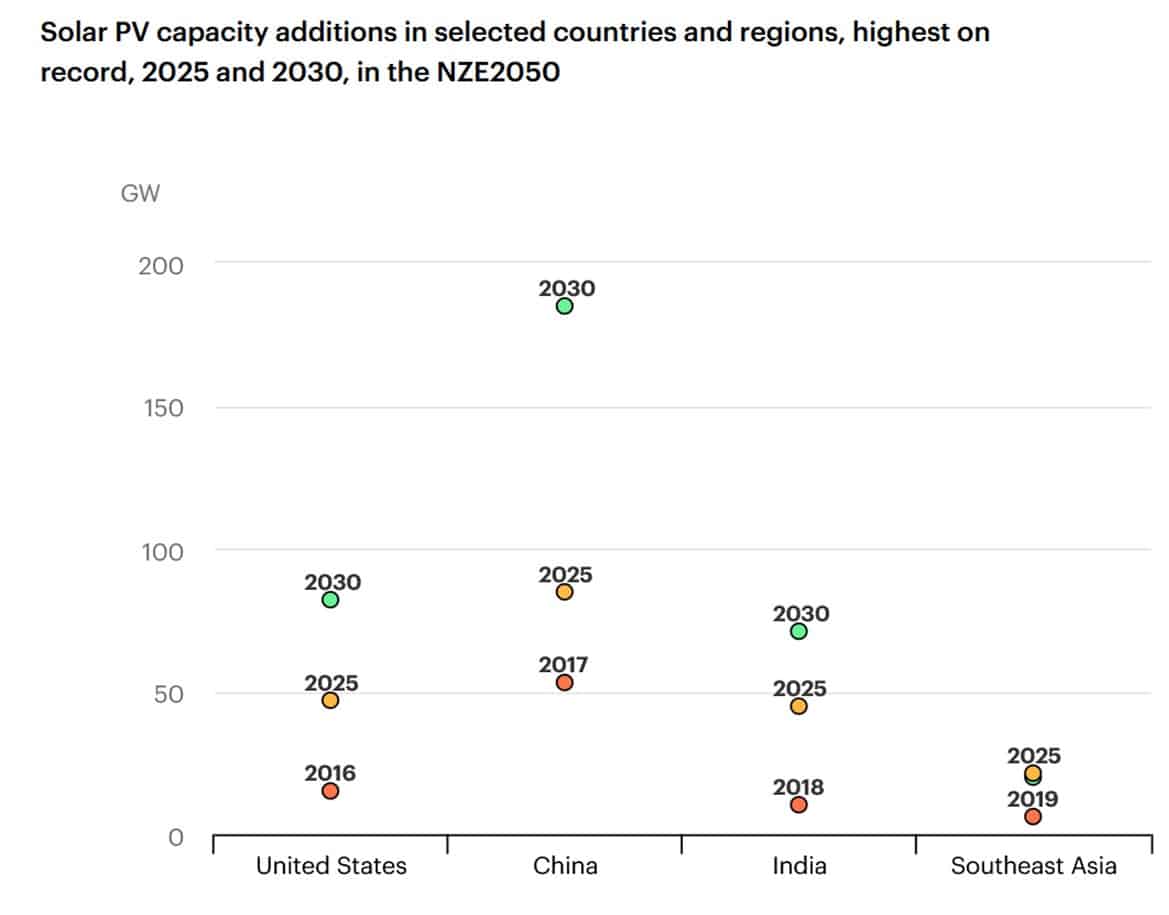 No Shortage of U.S. Federal, State and Utility Incentives, Despite Political Rhetoric

A combination of declining PV panel costs and government incentives have contributed to increasing PV adoption in the United States. Federal and local governments and utilities offer varying incentives that can be summarized into five categories:

Beyond Incentives – No Shortage of Renewable Project Financing

Governments and utilities are not the only agencies providing incentives for the development of renewable energy. As the chart below demonstrates, green bond issuances have cumulatively grown from almost nothing in 2010 to US$1 trillion in 2020, implying investors’ increased appetite for financing climate and environmental projects. This appetite appears to have materially accelerated since 2015. 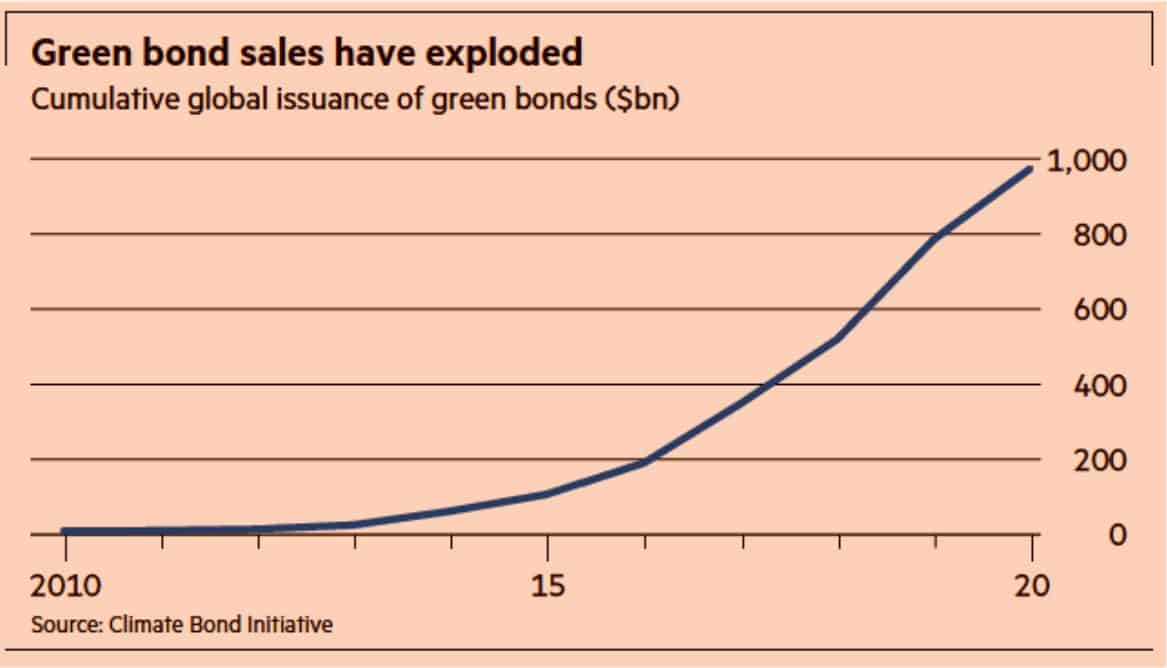 According to Deloitte, in April 2019, renewable energy provided 23% of U.S. power generation versus coal’s 20%. In the first half of 2019, wind and solar together accounted for approximately 50% of total U.S. renewable electricity generation, displacing hydroelectric power’s lead. Even the COVID-19 pandemic could not halt U.S. solar adoption – in the second quarter of 2020, the U.S. had installed 3.5 GW of solar PV capacity, reaching a total installed capacity of 85GW, enough to power 16.1 million homes. And as Exhibit 4 illustrates, 2021 should be a banner year for utility-scale PV as projects delayed in 2020 catch up next year.

Community solar expanded its geographic diversification. According to the SEIA, New York became the third market to exceed 300 MW of community solar capacity. The first quarter of 2020 was the Empire State’s second-largest quarter on record. However, the COVID-19 pandemic caused a 12% quarterly decline in non-residential PV segment (which includes commercial, government, non-profit and community solar) – its lowest quarterly total in four years. Restrictions during the initial stages of the pandemic delayed many projects, which will restart and carry over into 2021.

New York’s long-awaited community solar renaissance has begun in earnest, with another 100 MW of community solar projects brought online in Q1 2020 following more than 160 MW being installed in Q4 2019.

In our next report, we look at some solar transactions over the past 12 months to see what multiples were paid. We will also look at UGE’s project backlog, which stands at over US$100 million, and the multiple the market currently applies to UGE. With these data points, investors should be able to determine if risk reward potential in small cap stock UGE warrants investing in the Company’s shares.

The information and recommendations made available here through our emails, newsletters, website, press releases, collectively considered as (“Material”) by Sophic Capital Inc. (“Sophic” or “Company”) is for informational purposes only and shall not be used or construed as an offer to sell or be used as a solicitation of an offer to buy any services or securities. You hereby acknowledge that any reliance upon any Materials shall be at your sole risk. In particular, none of the information provided in our monthly newsletter and emails or any other Material should be viewed as an invite, and/or induce or encourage any person to make any kind of investment decision. The recommendations and information provided in our Material are not tailored to the needs of particular persons and may not be appropriate for you depending on your financial position or investment goals or needs. You should apply your own judgment in making any use of the information provided in the Company’s Material, especially as the basis for any investment decisions. Securities or other investments referred to in the Materials may not be suitable for you and you should not make any kind of investment decision in relation to them without first obtaining independent investment advice from a qualified and registered investment advisor. You further agree that neither Sophic, its employees, affiliates consultants, and/or clients will be liable for any losses or liabilities that may be occasioned as a result of the information provided in any of the Company’s Material. By accessing Sophic’s website and signing up to receive the Company’s monthly newsletter or any other Material, you accept and agree to be bound by and comply with the terms and conditions set out herein. If you do not accept and agree to the terms, you should not use the Company’s website or accept the terms and conditions associated to the newsletter signup. Sophic is not registered as an adviser under the securities legislation of any jurisdiction of Canada and provides Material on behalf of its clients pursuant to an exemption from the registration requirements that is available in respect of generic advice. In no event will Sophic be responsible or liable to you or any other party for any damages of any kind arising out of or relating to the use of, misuse of and/or inability to use the Company’s website or Material. The information is directed only at persons resident in Canada. The Company’s Material or the information provided in the Material shall not in any form constitute as an offer or solicitation to anyone in the United States of America or any jurisdiction where such offer or solicitation is not authorized or to any person to whom it is unlawful to make such a solicitation. If you choose to access Sophic’s website and/or have signed up to receive the Company’s monthly newsletter or any other Material, you acknowledge that the information in the Material is intended for use by persons resident in Canada only. Sophic is not an investment advisory, and Material provided by Sophic shall not be used to make investment decisions. Information provided in the Company’s Material is often opinionated and should be considered for information purposes only. No stock exchange anywhere has approved or disapproved of the information contained herein. There is no express or implied solicitation to buy or sell securities. Sophic and/or its principals and employees may have positions in the stocks mentioned in the Company’s Material and may trade in the stocks mentioned in the Material. Do not consider buying or selling any stock without conducting your own due diligence and/or without obtaining independent investment advice from a qualified and registered investment advisor.

More videos to come from Brad Young our technical manager for @kontrolBioCloud. The response to the last video was great (well done Brad!).

The environment for @LegendPower in the US couldn't be better.
NAESCO Event Reveals Accelerated Momentum for ESCOs Under Biden-Harris Administration | Business Wire https://www.businesswire.com/news/home/20210318005155/en/NAESCO-Event-Reveals-Accelerated-Momentum-for-ESCOs-Under-Biden-Harris-Administration#.YG80qv1aBF0.twitter
$LPS $LPSIF $LPS.V