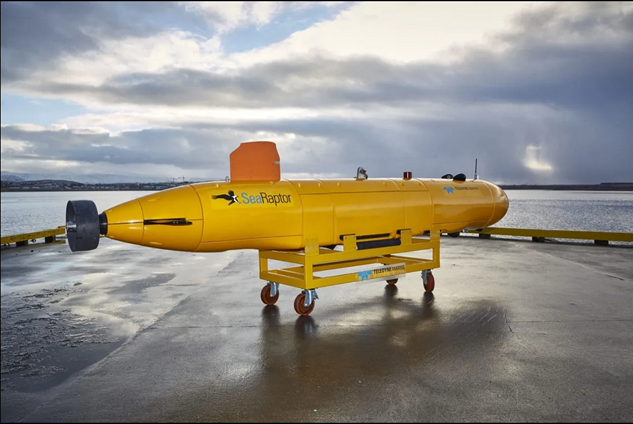 In Sophic Capital’s Bottoms up for Navies we discussed how key countries are investing in subsea defence to safeguard the worlds waterways. In this fourth report in our series, we highlight companies in the defence and commercial marine technology markets and how their businesses have grown. We will then conclude with a final report about Sophic Capital client Kraken Robotics [TSXV:PNG, OTCQB:KRKNF], laying out the investment thesis.

A lot has happened to the UUV industry since we first wrote about it in 2014. Some firms were no more than shots across the bows; others were dead in the water; while many rocked the boat. We wrote about those in the latter group in 2015 and provide updates on what they’ve done since.

When we last wrote about Teledyne Marine, the company had embarked on acquisitions. Teledyne bought: Bowtech Products, which makes harsh underwater vision systems; Bolt Technology, a leading supplier of marine seismic energy sources and replacement parts for offshore energy exploration; and The Oceanscience Group, a designer and manufacturer of marine sensor platforms and unmanned surface vehicles. The company’s Gavia AUV consists of “plug-and-play” modules that can be configured in the field. Gavia has defence and commercial use cases, including two Gavia SeaRaptors sold to Argeo, which provides commercial ocean surveying and infrastructure inspection. The SeaRaptors are rated to 6,000 meter depths and were planned to be equipped with Kraken Robotics’ MinSAS 120 Synthetic Aperture Sonar, providing large swath area coverage and high-resolution imagery and bathymetry data collection. 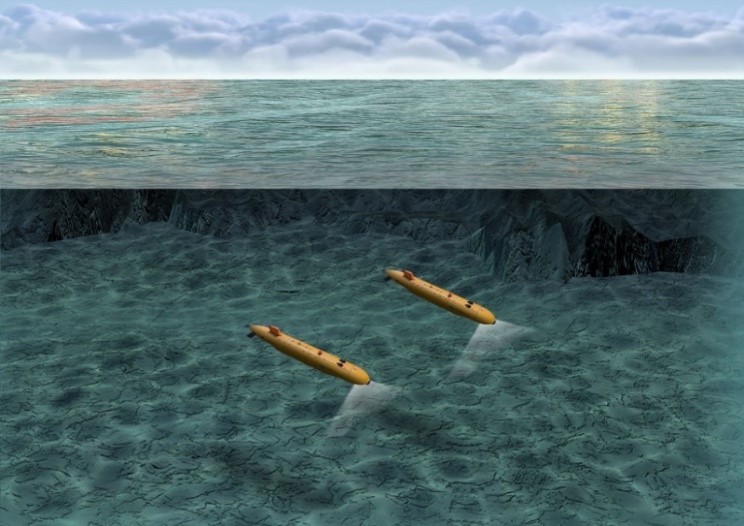 Thales Group designs, develops and manufactures electrical systems as well as devices and equipment for the aerospace, defence, transportation and security sectors. Specifically, Thales designs communication systems and subsystems for anti-submarine warfare and anti-mine warfare. These solutions are suitable for submarines, surface ships, helicopters, maritime patrol aircrafts and unmanned naval systems.  Thales’ combined active passive towed array sonar systems is in service or has been ordered across 80 systems. BlueScan ASW integrated acoustics systems utilize artificial intelligence to provide real-time analysis of big data collected by Thales’ sensors as well as 3D displays of the results.  Thales also has an extensive family of hall mounted sensors for surface ships with over 150 systems deployed.  Thales has sold its defence solutions to over 50 countries, including the U.S., U.K., and France. More recently, Thales has pitched its PathMaster unmanned MCM to the Korean Navy to detect, localize, and neutralize naval mines. 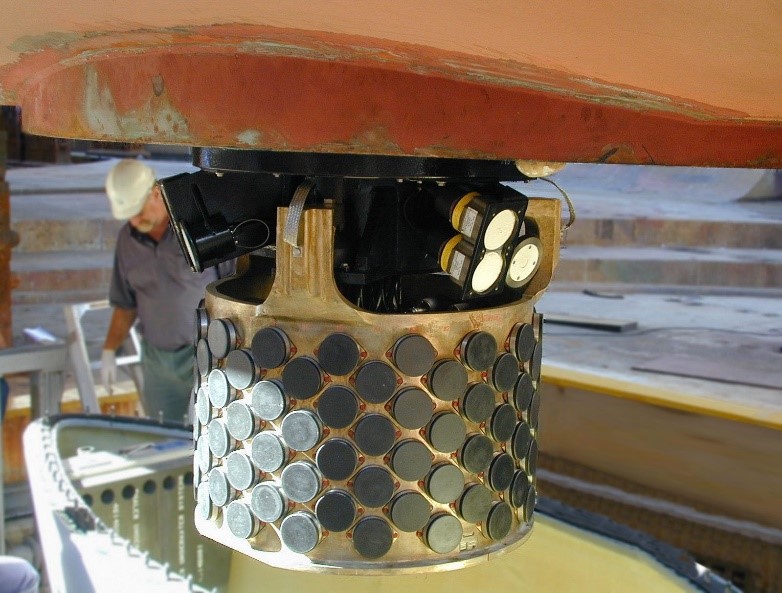 Lockheed Martin has developed unmanned and robotic systems for air, land and sea for over 4 decades. It is a global leader for underwater technology, especially unmanned subsea systems. Available to both military and commercial customers, Lockheed’s  Marlin® AUV uses advanced sensors and high definition video to create 3D models of the undersea environment and infrastructure that are up to 1,000 feet below level. Lockheed’s small AUV is similar in size to standard sonobuoy devices, allowing the AUV deployments from standard sonobuoy launchers, surface ships or aircraft. Common use for Lockheed’s small AUVs is ASW target practice. 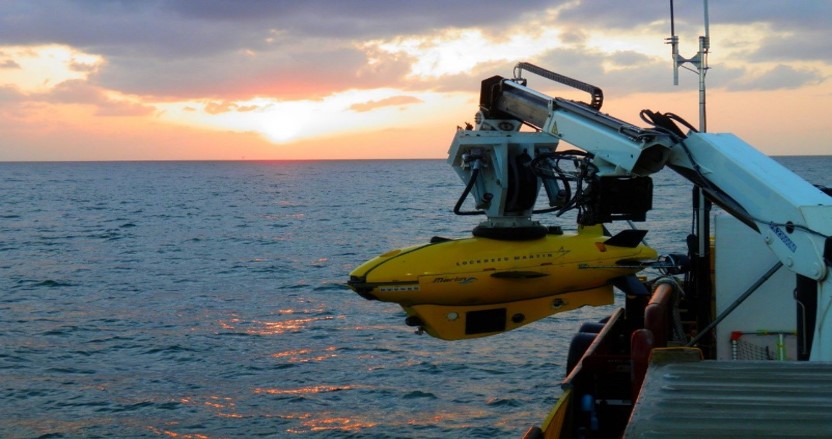 Many people don’t realize that Boeing has designed and operated manned and unmanned deep sea systems since the 1960s. The company has its 18-foot long Echo Ranger AUV that was originally used to capture high-resolution sonar seabed images in the Gulf of Mexico for the oil and gas industry. Capable of diving down to 10,000 feet, Boeing is now demonstrating Echo Ranger’s as a UVV for underwater intelligence, surveillance and reconnaissance missions, harbor and waterway patrol for security threats, and environmental testing.

Boeing’s fully extra large Echo Voyager AUV precipitated from Echo Ranger and Echo Seeker. In 2019, Boeing beat Lockheed Martin for the U.S. Navy’s ORCA AUV, a $274 million contract. Based upon Boeing’s Echo Voyager drone, ORCA deliveries could be delayed up to 3 years due to design and supplier issues. 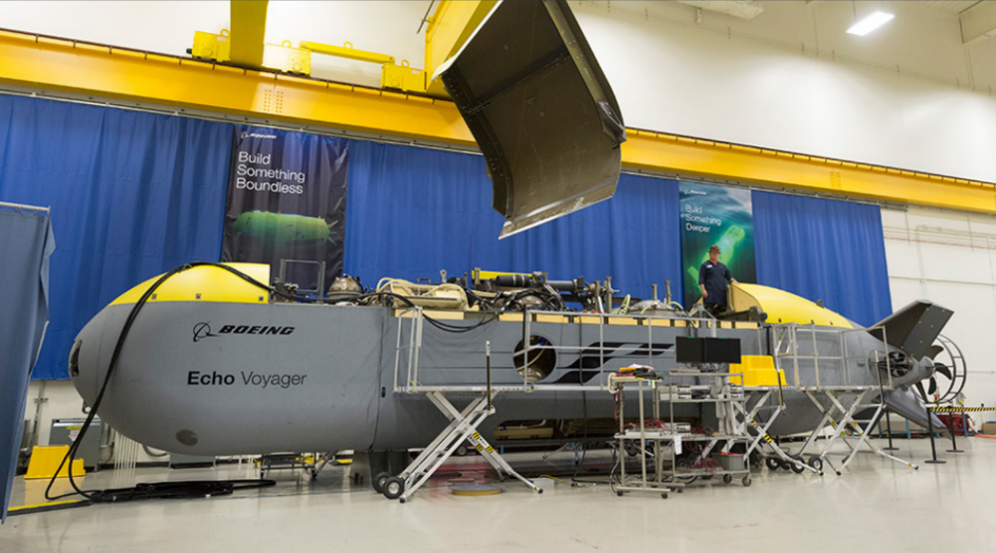 Boeing’s Echo Voyager experimental UUV is the template for the U.S. Navy’s Orca

Global engineering and defense technologies provider Huntington Ingalls (HII) Industries was selected for the U.S. Navy’s next generation program for the development of small UUVs. The Navy selected the company’s REMUS 300 UUV for its advanced modularity, open architecture, and compact, man-portable design. The selection comes after a 2 year protoyping period that involved multiple evaluations and refinements to the REMUS 300.  The intial phase of this award (under the Lionfish program) also includes producting and testing of units over the next year. Huntington is also producing the hulls for Boeing’s ORCA AUV.

Hungtington Ingalls acquired Hydroid, a leading provider of advanced marine robotics to the defense and maritime markets in March 2020. It is America’s largest military shipbuilding company. The company builds more ship classes than any other U.S. naval shipbuilder. Since 2001, Hydroid had manufactured and sold over 600 REMUS AUVs to the U.S. and other friendly navies and commercial customers, provideing innovative, rapidly deployable solutions for multiple use cases. The acquisition of Hydroid expanded HIIs capabilities in the strategic and growing autonomous and unmanned maritime systems market.

Although Raytheon has a strong presence in developing surface, air, and space products and systems, the company does have a naval warfare division. The legacy AN/AQC-20C sonar mine hunting system has acoustic and identification sensors housed in an underwater towed body. The U.S. Navy is a customer.

Founded by Palmer Lucky, who sold Oculus to Facebook for $2 billion, Anduril is developing the next generation of military technology. The company recently closed over $1 billion in new capital to continue to fund its M&A strategy. Unlike hardware-centric solutions developed by traditional defense contractors, Anduril’s suite of capabilities is centered around Lattice OS, its autonomous command and control platform. Anduril’s DIVE-LD is a customized AUV for littoral and deep-water survey, inspection and intelligence, surveillance, and reconnaissance. In May 2022, Anduril announced a partnership with the Australian Defence Force to develop extra large AUVs. 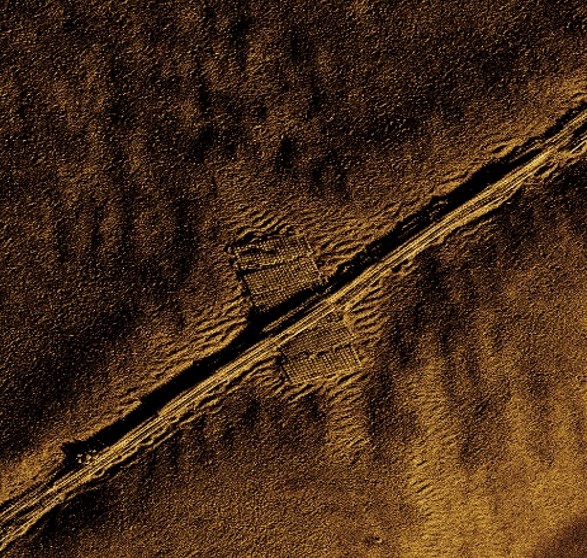 Anduril partnered with the Royal Australian Navy to develop three Extra Large Autonomous Undersea Vehicles (XL-AUVs). The three unmanned subs will cost AU$140 million (US$100 million). The program will integrate long-endurance AUVs with multi-mission payloads for both military and non-military use cases. Such use cases include, “advanced intelligence, infrastructure inspection, surveillance, reconnaissance and targeting.”

Anduril has grown through making strategic acquisitions. On February 2, 2022, Anduril bought Dive Technologies, a start up  AUV pioneer that created the DIVE-LD. In September 2021, on the back of a $450 million Series D financing in June 2021, Anduril acquired Copious Imaging, a leader in passive sensing technology for aerial and ground systems. This followed Anduril’s  April 1, 2022 purchase of Area-I, a company focused on unmanned air launched systems. Clearly, non-organic growth is part of Anduril’s strategy, which may explain why the company recently closed a $1 billion financing round.

ECA Group is a market leader in specialty autonomous and remote-controlled mine detection, classification, and neutralisation solutions. The company’s drones are in operation across 80 countries underwater, on the surface, on land and in the air. In 2019, ECA was awarded a contract to supply 12 minehunting vessels to the Belgian and Dutch navies. ECA was absorbed into Groupe Gorge during a merger in December 2020 and recently acquired iXBlue. It won the Belgium Navy minehunting program announced a few years back.

ATLAS ELEKTRONIK, a Thyssenkrupp Marine Systems company, is a maritime high-technology enterprise with expertise in hydroacoustics, sensor engineering and information technology.  In April 2022, ALTAS announced that it had been contracted to supply AUVs to the U.K.’s Royal Navy for naval mine hunting. The £32 million contract calls for the delivery of 9 vehicles, including 3 mine hunting AUVs. In 2021, ATLAS was also contracted by Lockheed Martin Australia for the design of a new acoustic bow array for Australia’s Attack class submarines. 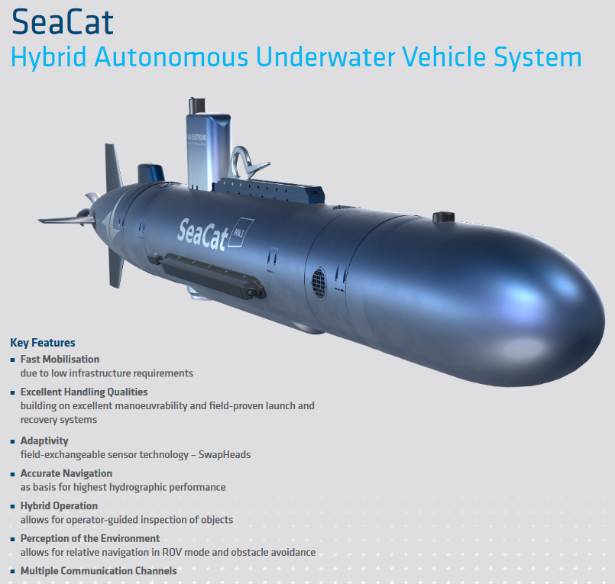 Ultra, previously Ultra Electronic Holdings, provides application-engineered solutions in the key elements of mission critical and intelligent systems. About 46% of 2021 revenues came from its Marine segment, where Ultra has various sensors for applications that include towed arrays, sonobuoys, and variable depth sonars. In April 2022, the U.S Navy awarded Ultra and its partner Sparton, a designer of maritime electronic systems, an $11.6 million contract to provide sonobuoys for the Navy’s anti-submarine warfare (ASW) aircraft.

Nauticus Robotics (formerly Houston Mechatronics) develops and deploys ocean robotics solutions and cloud software for the marine industry. Nauticus merged with CleanTech Acquisition Corp via SPAC in September 2022 on a US$500 million valuation. The Company recently announced a follow up contract with the U.S. Defense Innovation Unite (DIU) for an autonomous amphibious robot. The DIU is a Department of Defence organization that aims to solve national security programs leveraging partnerships with commercial companies. The stock rose 48% after the announcement.

Sonardyne specializes in acoustic, inertial, optical and sonar technologies that targets the offshore energy, maritime defence, and ocean science markets. The company has seen the exploration and reservoir surveillance market order its Pressure Inverted Echo Sounder technology in the first half of this year. Asso Group, which provides submarine cable installation and repair, selected Sonardyne subsea sensors for it trenching machines. And earlier this year, Sonardyne announced a memorandum of understanding with MSubs to enhance performance of AUV platforms. The companies plan to enhance  underwater situational awareness capabilities for the U.K.’s Ministry of Defence.

In our final UUV Report, we will discover how Sophic Capital client Kraken Robotics [TSXV:PNG, OTCQB:KRKNF] is navigating through this strategic market. Kraken Robotics is a marine technology company supplying advanced sonar and laser systems, and subsea power solutions for UUVs for military and commercial applications.