Swarmio Has Over 1 Billion Gamers in Its Sights 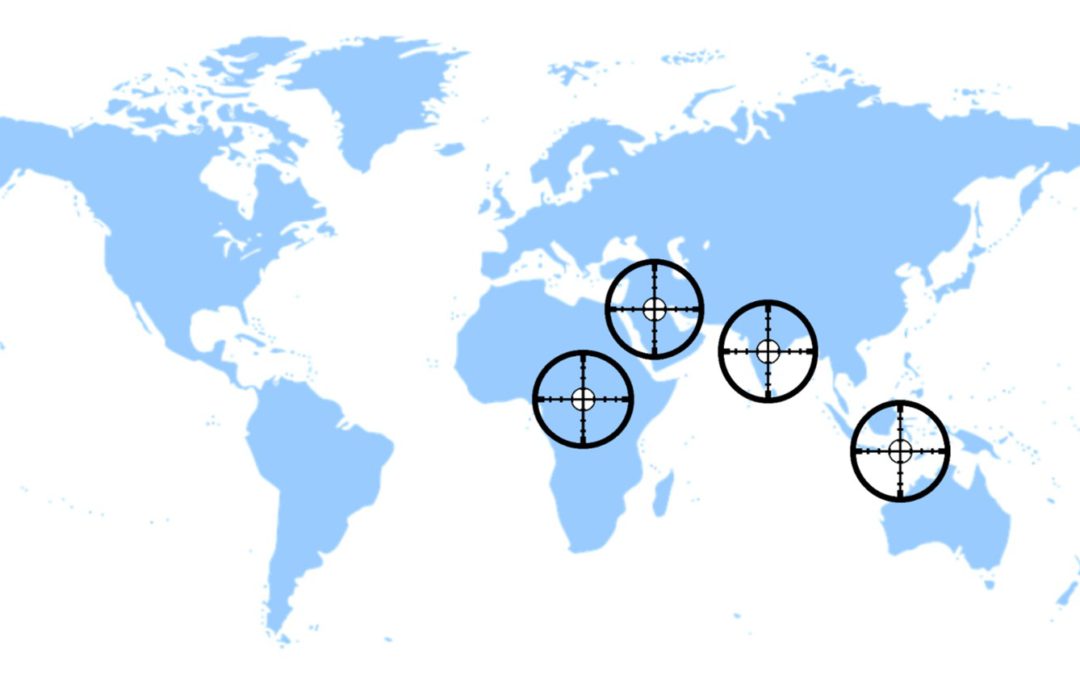 In Sophic Capital’s Getting into the Game report, we highlighted:

In this report, we detail Swarmio’s targeted markets in the Middle East and North Africa (MENA), Southeast Asia (SEA) and South Asia (SA).

In gaming terms, “area of effect” (AoE) refers to attacks or abilities in a certain area. Swamio Media’s AoE is MENA, SEA, and SA because: a) According to NewZoo, about 1 billion gamers live in these markets; b) more than 70% of this population is young, making these markets very attractive to telcos; c) These are markets that have the greatest demand for latency and gaming improvements, and; d) Swarmio’s management has strong ties to major telecom operators in these regions. This does not mean that Swarmio has ignored Western markets; in fact, the Company is actively engaged with telcos in these regions and across the world. However, most efforts have been allocated to MENA, SEA, and SA for the aforementioned reasons.

Led by seasoned telecom veterans, Swarmio Media [CSE:SWRM, FRA:U5U] has all the capture points (a gaming mode where key objectives are captured) needed to meet the needs of gamers and telecom operators. Swarmio knows that gamers want seamless and reliable access, community, trust, and – games! Swarmio knows that telcos want seamless, off-hand services that will generate new revenues without disrupting existing network reliability. Swarmio addresses both stakeholders. And as mentioned in Sophic’s Helping Telcos Break Into the Game, Swarmio’s turnkey products Swarmio Hive and Swarmio Matrix could be the perfect fit for telcos in these regions to monetize young subscribers by improving their gaming experience.

MENA, SEA and SA telcos are game for Swarmio Media. Sri Lanka’s SLTMobitel (Exhibit 1) teamed with Swarmio Media to launch the SLT Esports Gamer Package to provide the telco’s customers with the best gaming content and experience. Sri Lanka telecom uses Swarmio’s platform to reach and monetize the hard-to-reach demographic – Gen Z, Millennials and other Digital Natives. SLTMobitel bundles the gaming package with its Internet product to increase Average Revenue Per User (ARPU) from its existing users. Swarmio is currently in discussions with many very large telecom operators in the MENA, SEA and SA region. 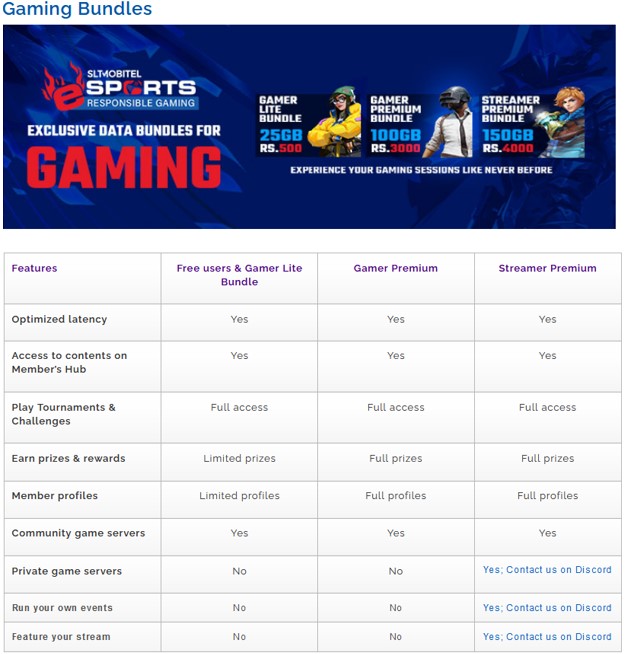 The gaming industry is a large and continually growing market that is mostly being driven by Millennials and Gen Z. This rise in gaming popularity positions Swarmio extremely well in a category that could dominate the entertainment industry moving forward. Today, 87% of Gen Z’s say they play video games daily or weekly. About 26% of Gen Z’s also said that watching video games is their top entertainment activity. Millennials are also playing and watching gaming content (about 71% of them). For a company that provides services to improve gaming and create a community for gamers to watch and interact with others, Swarmio is in a great position to capitalize on this large demographic. Swarmio’s opportunity becomes even more interesting after a recent study found that 52% of gamers subscribed to at least one gaming service, (something Swarmio’s platform provides). With nearly 90% of Gen Z playing video games and over half of the gamers subscribing to a subscription gaming service, Swamio Media clearly understands the needs of this large market and developed solutions that provide the better gaming experiences and community that this market seeks.

The underserviced MENA, SEA, and SA regions provide large growth potential for Swarmio as the Company enters these regions. The main demand in the gaming world today is low-latency connection, to ensure fair and optimized gaming takes place. As discussed in Sophic’s Getting into the Game Piece, while nations like the United States and Canada begin to shift to 5G networks, which will provide faster download speeds and lower latency, areas like MENA are just beginning to get over 50% coverage with 4G, a service that is estimated to be 10 times slower than 5G. These slower speeds and higher latencies along with the demand to improve gaming quality creates a void that Swarmio’s turnkey solution Matrix could fill along with their telco partners. Swarmio Matrix combats the inequality in gaming speeds across the globe by providing a service that offers faster and more responsive processing closer to gamers to better the experience.

The MENA, SEA, and SA are regions that are populated with Gen Z gamers that companies are struggling to relate and market to. The young populations in these regions – the populations that favour gaming over any other entertainment – is why Swarmio is targeting these markets first.  For example, in Canada, the average age is 41.1 years old. This is more than 10 years older than the average age of many of the MENA and Asian regions Swarmio is targeting (Exhibit 2). 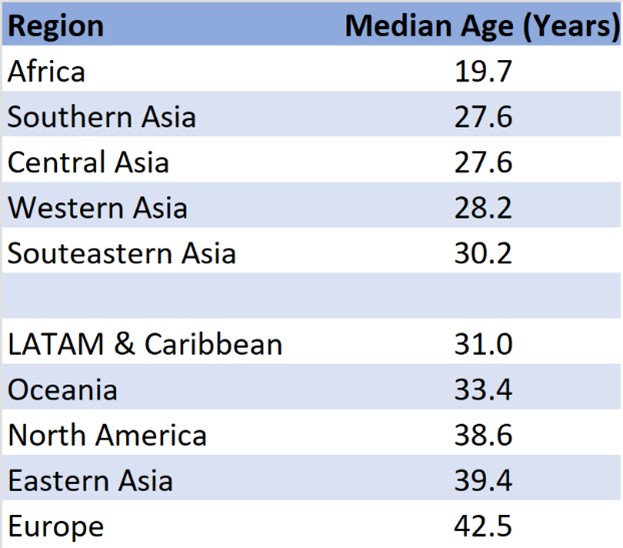 This younger, tougher-to-reach audience creates a challenge for many telcos since Gen Z cares more about the quality and reliability the service provides rather than brand loyalty. Brands struggle to connect with Gen Z largely because this demographic rejects traditional marketing methods. Community is important to Gen Z. Community is their identity – their tribe, and communities are not as simple to create as brands throwing a bunch of money at the task. Community-building is time consuming for brands – including telcos.

However, Swarmio’s solutions provide the platform to build Gen Z communities.  As discussed in Sophic Capital’s Helping Telcos Break Into the Game report, Swarmio Hive creates a sense of community that younger generations are looking for, creating a large advantage for Swarmio in these regions. This sense of community that Swarmio creates is what Gen Z and younger audiences are demanding, making these areas an attractive place to expand to.

By focusing on MENA, SEA, and SA, Swarmio can gain access to a very large addressable market. To build on that, in 2021 Asia accounted for more than 54% of the global esports market, which shows that the regions Swarmio is targeting are dense with gaming enthusiasts. With strategic partnerships with telcos and a product gamers love, Swarmio could capture a lot of this audience. With 87% of Gen Z’s saying that they play video games daily or weekly, these young and growing regions that Swarmio is targeting could create a lot of potential long-term customers.

With a large network of gamers and an equally large network of telcos, Swarmio could sign several key deals beyond the 5 it currently has in these regions, representing an addressable market of nearly 60 million users. Included in these deals is Bahrain’s Batelco, which had sales of over $US1.1 billion in 2020, and was the 8th largest telco in the Middle East. And Swarmio could sign 4 more telcos in early 2022, representing potentially over 200 million additional Swarmio users. The deals that Swarmio has signed along with the extensive pipeline they have created could mean that this is just the beginning of large contract signings. In the Middle East, where gaming expected to continue growing at a 12.1% CAGR until 2026, the top 10 telcos were valued at over US$106.9 billion in 2020. In Africa, the top 5 telcos generated over US$25 billion in revenue. Thus, Swarmio is well positioned to potentially add meaningful revenue as these telcos launch the solution.

A Large and Responsive Market

Swarmio has conducted a soft launch in three countries within their target regions and results have been positive. Based on investor materials on Swarmio’s website, Swarmio saw over 189,000 site visits during these soft launches with an impressive 55,000 of these viewers creating an account. This conversion rate equates to 29%, which is nearly 15x higher than the standard SaaS conversion rate of 2% within the whole industry. This high conversion rate creates a large competitive advantage as making an account is the first tier of revenue generation for Swarmio as account members can make in-game purchases. In the soft launch, 10,000 players have already gamed, and an additional 350 have subscribed, showing that players are interested and commitment to using the Swarmio platform is increasing.

Sea Limited (NYSE:SE, $94 billion market cap) is a global consumer Internet company offering three main services, Garena, Shopee, SeaMoney. Garena is an online gaming and development platform that offers users access to popular and engaging mobile and PC games. It is also an esports team. Shopee is an e-commerce platform in Southeast Asia that is a lot like Amazon. SeaMoney is a digital payments and financial services provider in Southeast Asia. Essentially, Sea offers the same services as Swarmio but does not have patented EDGE cloud technology like Swarmio.

Akamai (NASDAQ:AKAM, $18 billion market cap) and Fastly (NYSE:FSLY, $3.5 billion market cap) both offer cloud servicers in the United States and Internationally. Their edge computing services compete with Swarmio’s EDGE technology; however, they are both more focused on storage at the EDGE versus Swarmio’s Servers/Compute Process at the EDGE, which we believe is far more complicated than storage.

Skillz (NYSE:SKLZ, $2.2 billion market cap) is an online gaming platform that allows players to compete in competitions across the world. Skillz competes directly with Swarmio HIVE, the Company’s turnkey gaming and esports platform for telecom operators. However, Skillz focuses on casual games whereas Swarmio also targets competitive and AAA games (games produced and distributed by mid-sized or major publishers and typically have higher development and marketing budgets than other tiers of games).

Exhibit 3 shows how the market values Swarmio Media comparable companies. We note that we have not included Swarmio Media in Exhibit 3, since it has yet to generate revenue, positive EBITDA and net income. Exhibit 3 includes several microcaps (issuers trading below US$300 million market cap). Some of these microcap issuers trade above and below peer averages, so it appears as though investors could be indifferent to the size of these peer companies. We also note that comparable companies on average trade at 40% of their 52-week highs, indicating a sharp pullback occurred in parallel, similar to other non-related industries (solar and Canadian microcap technology issuers come to mind).

Investors should watch for Swarmio to execute on new telco relationships, which should in turn lead to subscriber growth and then revenue growth in the coming 12 to 24 months. Given the Company is pre-revenue, investors need to see subscriber growth and sign-ups continue as the Company has enjoyed in the early days of its first few launches. We believe the market will extrapolate that growth and revenue potential and then be able to model future revenue growth and apply multiples to revenue and earnings several years out to formulate the right valuation for the stock.

Get in the Game

This report demonstrated 3 trends that we think will grow:

Investors seeking to participate in the gaming and telco industries as well as the growth and prominence of the Gen Z demographic should consider Sophic Capital client Swarmio Media [CSE:SWRM, FRA:U5U]. Swarmio provides a turnkey, telecom-grade edge computing solution that telcos can use to capture and monetize Gen Z gamers. The solution ensures Gen Z has the best connectivity experience for gaming as well as channels to build communities (crucial for this demographic). The Company is pre-revenue but has signed major telco operators in MENA, SEA, and SA. For more information, please visit Swarmio Media’s investor relations page.

Sign up for all Sophic Capital’s reports at https://sophiccapital.com/subscribe/