Poised for Continued Growth in Military and Commercial Markets

In our 4 prior reports in this series, we detailed how governments and industry competitors are investing heavily into unmanned underwater vehicles (UUVs):

This report focuses on how Sophic Capital client Kraken Robotics [TSXV:PNG, OTCQB:KRKNF] is leading the global fight for subsea supremacy. Military and commercial markets continue to grow as both incorporate unmanned vehicles and intelligent sensors in their procurement plans and budgets. Kraken Robotics (“Kraken”) is becoming a major supplier for these markets, providing its advanced imaging, sensing, and subsea power solutions for military grade and commercial UUVs. The Company also operates a Robotics-as-a-Service (RaaS) division, targeting commercial, underwater infrastructure for oil and gas, offshore wind, pipelines, and telecommunications networks.  Kraken has been winning large defence contracts with several NATO Navies, including the Danish and Polish Navies. The Company has also done business with the U.S. Navy, Government of Canada, and several global defense contractors.

Kraken Robotics is a marine technology company supplying advanced sonar and optical sensors, batteries, and underwater robotics equipment and services for military and commercial applications. Kraken Robotics is a world leader of Synthetic Aperture Sonar (SAS) – an underwater imaging technology that dramatically improves seabed surveys by providing ultra-high-resolution imagery at superior coverage rates. The Company’s AquaPix® SAS has been deployed on over 20 underwater vehicle platforms across all ocean depths, including some of the most advanced systems like Huntington Ingalls Industries’ REMUS 620 UUV. 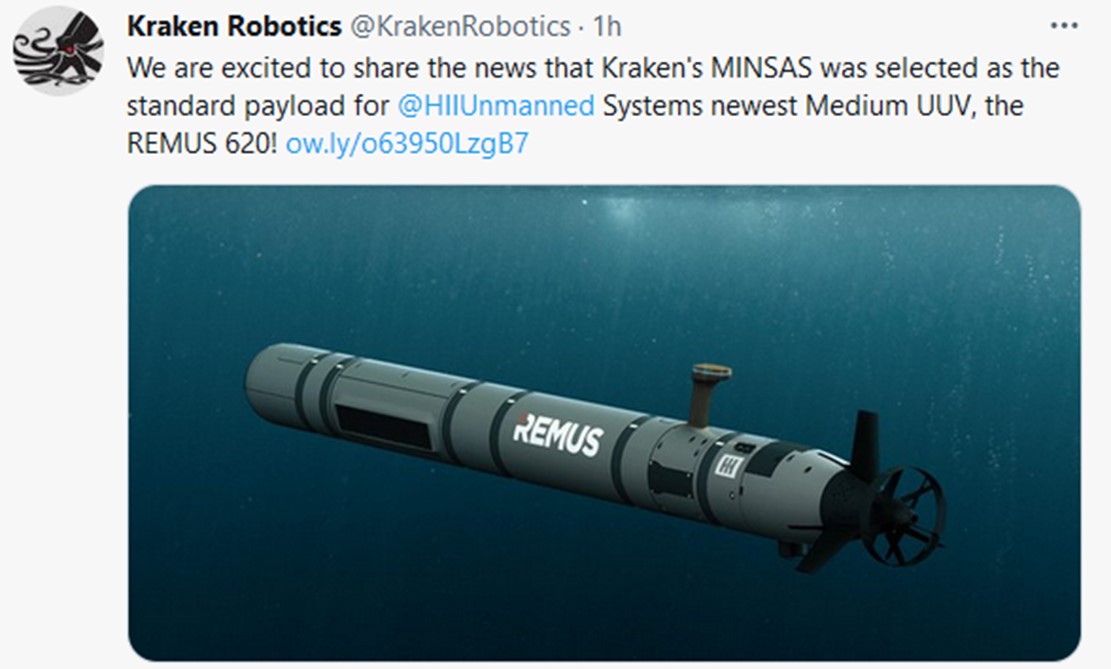 As discussed in prior Sophic Capital reports, underwater drones are a global phenomenon. Kraken Robotics’ products and services are in high demand from multiple naval forces and commercial contractors around the world. With the war in Ukraine, tensions surrounding China, and the sabotage of the Nord Stream pipeline, the need for underwater technologies capable of providing seabed intelligence has never been greater. We believe Kraken Robotics will continue to benefit from this surging demand and capitalize on the massive inflow of government defence funds and infrastructure integrity spending. We say “continue” because over the past 6 months, Kraken has disclosed several new contracts, including a:

Although Kraken Robotics is known throughout the maritime tech industry for its SAS and laser imaging sensors, it also incorporates its sensors into its towed KATFISH™ UUV and ThunderFish AUV (Kraken’s fully autonomous underwater vehicle used by the Canadian Department of Defense). As we mentioned in Sophic Capital’s Unmanned Underwater Vehicles – The Most Challenging Technologies to Develop report, there is a parallel between AUVs, UUVs and autonomous cars. The value of autonomous cars is in the sensors. So too, is AUV/UUV value tied to sensors.  But integrating sensors into a complete system is extra value add, especially in the case of AUV/UUVs whose operating environments are far harsher than that endured by autonomous cars and even spacecrafts. 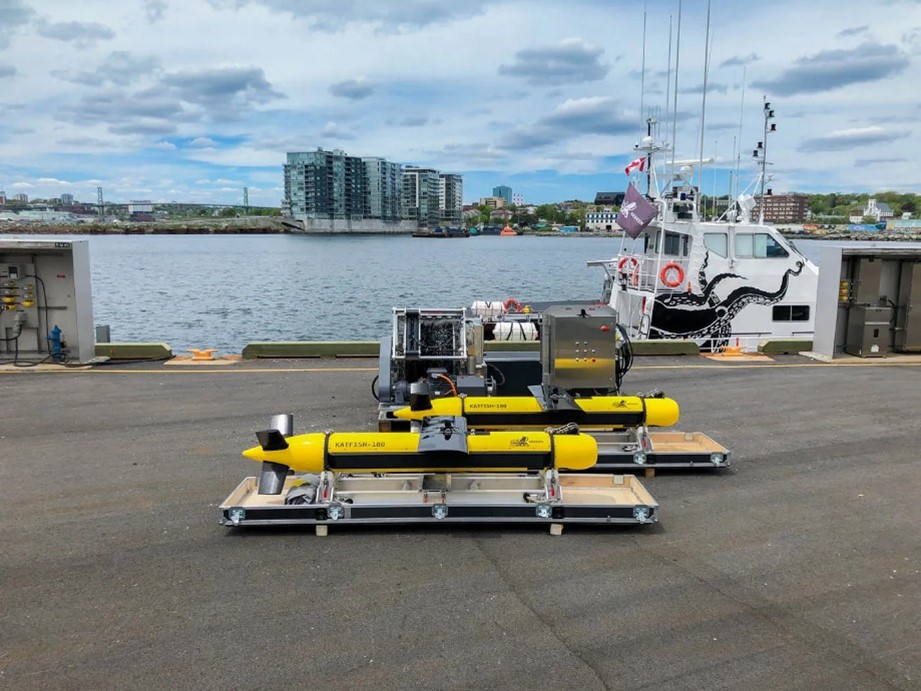 Kraken Robotics’ KATFISH UUV was recently demonstrated at several international Naval exercises, including at an industry event in Scotland for considerations by the Royal Navy. One military use case gaining widespread adoption for AUV/UUVs is minehunting.  And Kraken Robotics is a leader; the Danish and Polish Navies both currently have contracts with Kraken for minehunting systems. Kraken is delivering its KATFISH towed Synthetic Aperture Sonar, Tentacle Winch™ and Autonomous Launch and Recovery System (ALARS) to the Royal Danish Navy and the Polish Navy. The total contract value when announced was approximately $36 million. Kraken’s technical upgrades to the project were successfully delivered in July 2022, with expected operational deployment in early 2023. 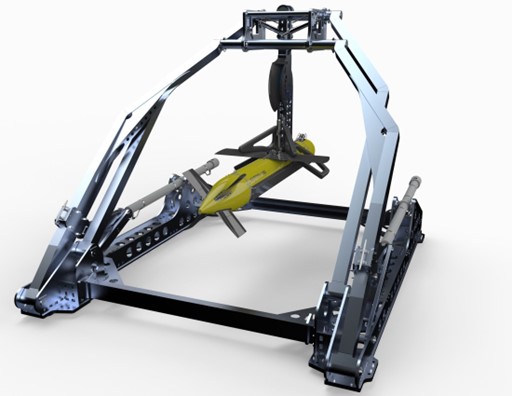 KATFISH™ and ALARS in Storage Position 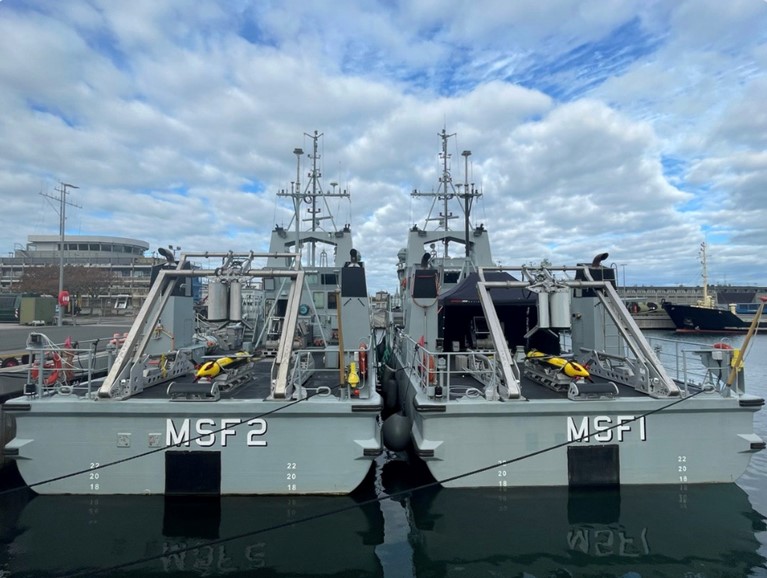 Kraken Robotics’ minehunting system will also be integrated into the Polish Navy’s new KORMORAN II Mine Counter Measure vessels. A high-ranking Polish Naval Officer noted that, “…with such an advanced Synthetic Aperture Sonar onboard, our new MCM Vessels under the Polish and NATO flag will make a huge contribution to build both national and international security at sea as we face the naval mine challenges of the 21st century.” 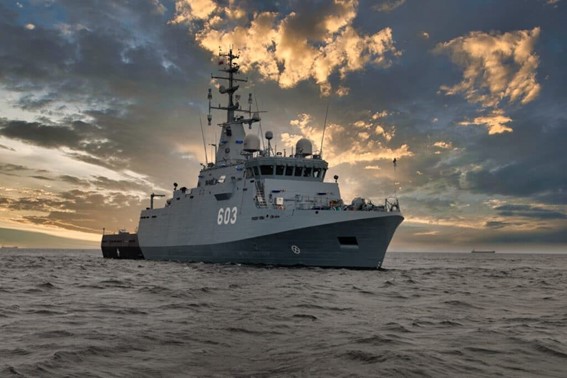 Furthermore, Kraken is gaining industry-wide adoption of its SeaPower™ batteries – recently, Kraken announced a $1.1 million follow on battery order from an undisclosed AUV manufacturer. These high-energy density, pressure tolerant batteries utilize silicone encapsulated lithium-polymer cells, making them THE power source for diving to the greatest depths of the sea.

Unlike militaries whose preference is to own and operate subsea vehicles, commercial enterprises only want the data that sensors aboard AUVs and UUVs collect. With this in mind, Kraken Robotics unveiled its RaaS, a business model targeting commercial industries (largely energy, renewables, and telecom). Kraken’s RaaS model brings more revenue certainty, with many contracts being recurring. Kraken Robotics’ first RaaS contract was its 2018 OceanVision project, a three-year, $20 million project focused on the development of new marine technologies and products to enable an underwater data acquisition and analytics as a service business.

OceanVision and the PanGeo Subsea acquisition were followed by a US$5 million decommissioning contract for PanGeo in the U.S. Gulf of Mexico.  In 2004, a storm induced mudslide toppled an offshore jacket 150 meters on the seafloor. The mudslide buried subsea conductors under 60 meters of mud. PanGeo Subsea was selected for its high-resolution sub-seabed imaging technology to identify conductor locations thus enabling the planning of the plug and abandonment of the well.

Then, in April 2022, Kraken Robotics won a RaaS contract for the Government of Canada. The contract gave the Royal Canadian Navy (RCN) exposure to Kraken’s ultra-high resolution survey equipment with results showing superior imaging compared to legacy sonar systems. The RCN’s evaluation will likely serve as a reference for adoption by NATO allies.

In May 2022, PanGeo Subsea was awarded several contracts collectively worth over $3 million for subsea cable detection surveys in Europe, again demonstrating the commercial versatility of Kraken’s technology. Using subsea cable detection sensors on one of the world’s largest windfarms in Europe demonstrates the potential to unlock multiple sources of revenue for the diagnostics, operation, and maintenance of subsea infrastructure.

Exhibit 1: Some of Kraken Robotics’ Customers 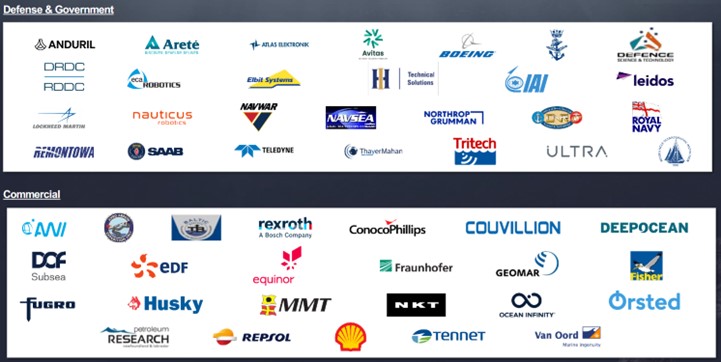 When Kraken Robotics released its Q2 2022 results on August 31, management reiterated 2022 financial guidance for revenue to be between $36 million to $42 million and adjusted EBITDA between $5 million to $7 million. Kraken expects 2022 operational results to be driven by the continued delivery of systems to the Royal Danish Navy, a full year impact from the acquisition of PanGeo and continued deliveries of AquaPix synthetic aperture sonar and SeaPower battery products. During 2022, Kraken is also expected to receive progress payments on two large contracts amounting to approximately $12 million, which along with guidance for . The Company also has $11 million in non-repayable funding and grants, 10 million warrants exercisable at $0.60 that could eventually get exercised, and perhaps most important receives 20% to 35% upfront payments when it signs contracts. In other words, it looks like smooth sailing for Kraken Robotics as we head into the end of 2022 and into 2023.